As part of our September newsletter, Sharla Alegria comments on the growth of the gender wage gap amidst changing employment structures.  Alegria is Assistant Professor of Sociology at the University of California, Merced.  Her research investigates race, class and gender inequalities within contexts that disavow discrimination.

Over the last few years, I have been forced to the realization that neither the gender pay gap, nor the race pay gap have improved since before I learned the meaning of the word pay. Not only did the gender pay gap nearly stop narrowing in the mid-1990s, even the modest improvement since then is from older workers, who had the largest gap, retiring (Campbell and Pearlman 2013). Meanwhile, the pay gap between all black and white men is now on par with 1950s levels (Bayer and Charles 2018).

Recent research on the pay gap tends to focus less on outright discrimination to explain race and gender differences and more on a few key areas where racial and gender inequality are results of other, sometimes intersecting mechanisms. These mechanisms include overwork, differential returns to men and women who enter parenthood, returns to education, the decline of unions, and unemployment, especially resulting from incarceration. We might think of these as mechanisms that produce categorical inequalities by other means. They have the effect of giving hierarchical meaning to durable social constructions of race and gender, but they are not clear and overt examples of discrimination per se. 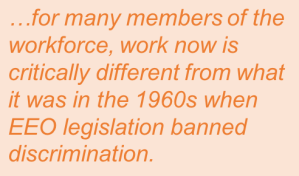 ineffective at addressing the new drivers of old and durable inequalities. Employers increasingly hire independent contractors and consultants to do narrowly targeted short to medium term tasks rather than depending on full time, benefitted employees. Workers focus on networking and skill-building to find and prepare for new jobs or gigs offering higher pay, more personal brand exposure, or other opportunities. In short, for many members of the workforce, work now is critically different from what it was in the 1960s when EEO legislation banned discrimination. The gig economy makes this point especially clear. How could EEO law be applied to Uber drivers or Airbnb hosts or any company whose primary workforce is made up of independent contractors and consultants? Consider that Uber has about 12,000 employees but roughly 2 million non-employee drivers and the opportunity to discriminate rests with the ride-sharing public more so than the company. We know that segregation and differences in starting salary at the point of hire are important drivers of inequality but what happens to workers who increasingly need not one job, but multiple, perhaps dozens of gigs to earn a living and each gig is negotiated outside any formal hiring process subject to oversight. Of course, for many working in the low pay sector of the economy, instability and multiple jobs have long been the norm, but what happens when there is not even nominal oversight in hiring in the form of EEO reporting?

How do scholars of work and inequality make sense of income inequality in these new times? First, we need to recognize that EEO law and the language of discrimination may have been useful given the way the workforce was structured in the past, but between the lax regulatory environment, emphasis on technical compliance, innovations to

decouple workplace diversity practices from the intent of the law, and the changing structure of work these laws do little to address how modern inequality operates. Discrimination is demonstrably still with us, but its operation is rarely direct or overt.  Second, we need to examine how inequality operates in the new work context with the understanding that these processes may operate through different mechanisms now than they would have in the past. Two examples of recent work that take this approach to studying how new mechanisms produce familiar inequalities are Alison Pugh’s (2015) book The Tumbleweed Society: Working and Caring in an Age of Insecurity and Ranita Ray’s (2017) book The Making of a Teenage Service Class: Poverty and Mobility in an American City. Both show how new labor force conditions, for Pugh, increasing instability, for Ray, the emphasis on higher education, deepen existing class divisions.

The increasing unmooring of workers from traditional employee relationships provides new opportunities for autonomy, agency, and choice while it raises anxiety about finding work, reduces pay for many, and perhaps opens new doors for old inequalities. It is an exciting time for sociological studies of work as we look to make sense of how inequality operates in this changing context.

Bayer, Patrick and Kerwin Kofi Charles. “Divergent Paths: A New Perspective on Earnings Differences Between Black and White Men Since 1940.” The Quarterly Journal of Economics 133(3): 1459-1501.