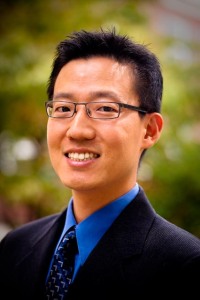 Shin’s research interests concern corporate governance, executive compensation, wage inequality, organizational sociology, and economic sociology. He is currently studying the institutional explanation for the rise of executive compensation and the symbolic effect of shareholder-value orientation on the career outcomes of executive managers.  Below, Shin expands upon his research and his professional experiences for the newsletter.

Your publications focus on executive compensation, corporate governance and income inequality.  What prompted your research in these areas?

When I was starting graduate school, I was determined to study labor market inequality. I was deeply interested in studying class, stratification, and workplace issues that generate persistent inequality, and I wanted to contribute to the literature on growing income inequality in the United States. That literature has been dominated by labor economists, so I thought I could do something definitely more sociological about this topic. While I was very impressed by studies in the literature that analyze individual-level determinants of important labor market outcomes, I found myself wanting to know more about what goes on in the big picture. If workplace organization is what shapes the structure of opportunities for individuals, who controls the organizations? If managerial policies and practices determine the distribution of job rewards, who gets to occupy those positions in power to create those policies and practices? And ultimately, whose benefit do those organizational policies and practices serve? So I was naturally drawn to the literature in organizational theory and management. Soon I learned that corporate governance is the key concept that addresses these issues. I realized that executive compensation is a natural linkage between corporate governance and income inequality. The mechanism that provides rewards and incentives for top decision-makers affects income distribution at the top as well as managerial behaviors that in turn can cause a whole array of many things including corporate strategy and employment relations. So I ended up studying executive compensation more seriously and also related topics such as executive succession and shareholder power. There are still so few sociologists studying these fascinating topics.

In your previous research, you found — somewhat paradoxically — that an emphasis on shareholder value often serves the interests of CEOs, regardless of performance.  Following the financial crisis and recession, how do you expect this dynamic to have changed (if at all) and why?

In the wake of financial crisis and recession, we did see a significant rethinking of shareholder value model. Critics of shareholder value voiced their arguments against shareholder value, blaming the model for encouraging reckless risk-taking and speculative behaviors that sank down the economy. Even some of the shareholder proponents and Wall Street investors chimed that perhaps the focus on shareholder value went too far. Relatedly, the past several years witnessed a surge of all kinds of alternative business models—stakeholder management, corporate social responsibility (CSR), sustainability, and so on. While this has a significant momentum to undermine hegemony of shareholder value model, I think two things remain the same: first, shareholder value principle is still predominant over any alternatives, and second, CEOs are savvy managers who are skillful at steering shareholder-value bandwagon. This is seemingly a paradox because shareholder power over management is ever more increasing, as evidenced by frequent activism by large shareholder groups, while CEOs still remain such powerful elites. I think the CEOs’ persistent power does in part come from their allegiance to shareholders. In my opinion, in many cases this is an allegiance in name only. CEOs often signal their loyalty to shareholders, but this is often more strategic and symbolic rather than substantive. Rather than undermining CEOs’ power, their allegiance to shareholders often justifies and institutionalizes their continued influence.

You employ quantitative methods in much of your research on executive compensation.  In what ways might experimental, qualitative or mixed-methods research designs build upon your findings?

I do enjoy reading studies that use methods other than quantitative methods, and more often than not I learn something important and innovative from those studies. I think my work reflects those insights, but I do hope to use those methods more directly in my future research. In the literature about corporate governance and executive managers, it is challenging to use qualitative methods such as interviews and participant observations because of the difficulties in gaining an access. Top managers, boards of directors, and big investors are often very exclusive about who they interact with. However, getting an access isn’t entirely impossible, and recently there have been some innovative efforts, for example through executive training programs at business schools.

Your experience spans across sociology departments and business schools.  What synergies and disconnects have you observed between these two settings?

Through serendipity, I stumbled into professional schools after getting a Ph.D. in sociology. At a personal level, it has been a great learning experience to get exposed to different perspectives, and I have been able to focus more on the empirical context of my research: corporate governance and executive compensation. It also gave me an opportunity to be self-reflective about my own scholarly identity: what does it mean to be a sociologist? How is sociology different from any other disciplines? Some of these thoughts would have never occurred to me had I stayed within sociology departments. In my brief experience so far, I’ve seen many great scholars in business schools whose work is essentially sociological. To my surprise, many of them do not call themselves sociologists, and their work is not always well recognized by other sociologists. On the other hand, some excellent sociological work by sociologists is not very well recognized by business school scholars. I found that the boundary between the two settings is more porous and fluid than I had thought. The disconnects between the two are probably not entirely based on substantive distinctions in terms of contents of work but also on institutional and cultural differences on many levels.